Woke up excited at 4:00am, caught our pre-ordered cab at 5:05am for yyc and the American homeland security! Everything was on time and ran smoothly. I was expecting a bigger plane from Calgary to Salt Lake City for some reason. I don’t know my planes but it was about 20 rows deep.
We arrived at slc airport at 9:50am, starving. Being in “the land of the free” no one goes hungry, right? Luckily Dick Clark is alive and well. And so is his diner!! One Cajun burger, fries and pork chop later we are back to life.

After all the waiting we are on our flight to las Vegas. It’s a much larger plane and everyone seems excited and in good spirits for Vegas. When we landed and walked thru the plane’s side door, we were slammed with the hottest air I’ve felt in years!

I love how Americans communicate, they are very to the point and still polite if you listen closely. We got on a shuttle to the new York new York hotel. Met a couple countrymen from Toronto!

After checking in and checking out our room, it was straight for the huge margaritas and flashy slot machines! Finishing our liberally poured drinks we decided it was shopping time. Hours and hours of walking were upon us and the heat does NOT stop. By the end of our trip we were tired, partied-out and loving Las Vegas!

Today we embarked on our amazing fourteen day adventure honeymoon to Las Vegas, LA, and San Francisco.  Our flight was at 7:45am this morning so we ended up being at YYC by 5:30am and then spent the rest of the time in security line-ups and getting coffees.  Since we couldn’t get a direct flight to Vegas our first stop was Salt Lake City airport.  The plane from Calgary to Salt Lake was a tiny one — only about 20 rows in it.  I remember riding in small planes like that when I was a kid living in Northern BC and Alberta.  Byron said it was like the plane to Sudbury from TO.

Flying over Salt Lake City, in our sleepy tired slightly airhead-ish state, we looked at eachother and out the window and wondered, “Is that snow?  What is all that white stuff everywhere?!” Then we realized it was salt as in, SALT Lake City….yep. Slow start for our brains today but its all good.  Tried to track down some great LDS displays at the airport for some photo opps, but no such luck so we ended up having lunch in the Dick Clark Diner, where I promptly got a million 1950s duwop songs stuck in my head.

Finally, it was time to board the plane to Vegas and boy were we ready to get going!  Our stop over was four hours and it felt like forever.  I promptly fell asleep on the plane, which Byron told me later was a good thing because the flight was quite turbulent from the strong winds over Nevada.  When we arrived at the Las Vegas airport we were SO excited!  Time to parrrty!  We got into the gate and there was slot machines the minute you got off the plane – awesome!!!  We went and tracked down an airport shuttle that would take us to NEW YORK NEW YORK and headed off into dreamland.  Our hotel is awesome!  So big with tons of fun restaurants, a giant casino, pool, roller coaster that goes around the outside of the building!  So much fun.

When we got to Vegas we realized that we were severely over-dressed. I mean, it was cold when we left Calgary so we had a reason. But we stripped down to the coolest clothes we owned and headed down to the casino.  The first thing we did was buy giant drinks and play a couple slot machines. Well, I think we drank those giant drinks a little to fast.  We decided to head out the strip to go shopping — feeling more than a little woozy!  We ended up walking the strip for hours and hours to the point of exhaustion, heat exhaustion, hangovers (because we didnt keep drinking!), sore feet, crankiness, and dry eyes (from the scorching hot wind blowing in our faces).  We couldn’t seem to catch a cab anywhere and couldn’t figure out public transportation so we ended up trudging all the way back to hotel where we realized we had walked WAY too far on the strip!  You never walk that far without a way of getting back.  Phew…..we hit the hay and woke up the next morning at 12pm.  What can I say it was an incredible first day of our honeymoon, if not a little tiresome.

On the plane from Calgary to Salt Lake City!

We made it to Vegas AND New York New York.

Things started to get blurry.

And then even blurrier…..

Me in front of our hotel!

Cashing in on the nudie cards!

Still happy and in love! 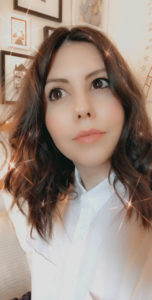